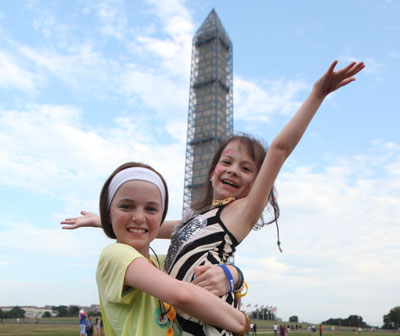 Leesburg, Va.–The Smashing Walnuts Foundation, a nonprofit organization dedicated to raising awareness and funding to find a cure for childhood brain cancer, commends Congress for coming together to pass, and the President for signing, a comprehensive appropriation bill that includes critical research dollars to fight pediatric cancer and other devastating childhood diseases.

In addition to a $2 billion increase to the overall budget for the National Institutes of Health (NIH), the bill dedicates $12.6 million to the Gabriella Miller Kids First Research Fund for fiscal year 2016. We are thankful that Congress appropriated this critical funding and further instructed NIH to prioritize childhood cancer within the program through language requested by the Smashing Walnuts Foundation.

The Smashing Walnuts Foundation is proud to lead a diverse group of advocates working to secure funding for the Kids First Research Fund and other critical programs aimed at eradicating devastating childhood diseases. This year’s spending measure represents an important step forward in our endeavor, but we have quite a long way to go.  Only 4 percent of federal spending on cancer research is directed to childhood cancer.  In the case of many childhood cancers, such as diffuse intrinsic pontine glioma (DIPG), little progress and no new treatments have come in more than a generation.

However, we remain hopeful.  “We are extraordinarily grateful to Congress for continuing to fund research on childhood diseases as part of the NIH’s FY 2016 budget, and for recognizing the importance of focusing on cancer,” stated Ellyn Miller, Gabriella’s mother and executive director of the Smashing Walnuts Foundation.  There are eight more years of funding under the Gabriella Miller Kids First Research Act, which have the potential to make a meaningful difference in the lives of many children.  Under the Act, NIH is empowered to devote more than $125 million in grants over a decade to researchers studying critical diseases that threaten and claim the lives of so many American children.

About Gabriella Miller and the Smashing Walnuts Foundation

Gabriella Miller accomplished much in her short life, raising nearly $300,000 for children’s cancer charities, including funding for the Make a Wish Foundation to grant wishes to 36 children, co-authoring a book about childhood cancer, speaking at numerous events, including Curefest on the National Mall, and inspiring her family to pledge their lifelong commitment to carry on her work. Gabriella and her family smashed walnuts with a frying pan to symbolize the fight against her “walnut sized” brain tumor.

Three months prior to her death on October 26, 2013 at the age of 10, Gabriella, along with her parents, Mark and Ellyn Miller, and her younger brother, Jake, started the Smashing Walnuts Foundation to cure childhood brain cancer by funding scientific research and clinical trials.